Different Types of Acute Upper Respiratory Infections in the Head

Considering the fact that acute upper respiratory infections are very common not just in Grand Prairie but in other places in Alberta, taking Grand Prairie first aid classes can help residents avoid and manage these problems especially the specific types of diseases which can affect organs in the head. Here are some of these diseases. 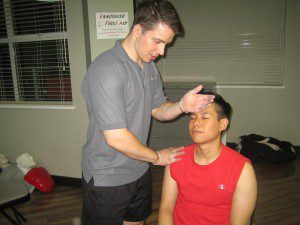 Fever – A symptom of sinusitis

Also known as rhinosinusitis, sinusitis is the medical term that is used to describe inflamed sinuses. This is the reason why one of its distinct symptoms is facial pain caused by this type of inflammation. It is one of the most common AURI in adults. According to researchers at the Meharry Medical College, it affects 13% of adults each year. Even though it has distinguishable symptoms, a case of acute bacterial sinusitis will only be officially diagnosed if the symptoms are felt by patients for more than 10 days in which the disease may progress into a chronic infection. This is why medical interventions are ordered upon the development of these symptoms even if the patient is not formally diagnosed with acute bacterial sinusitis.

A patient is diagnosed with Otitis Media if his or her middle ear is infected or is inflamed. One of the most distinct symptoms of this condition is the feeling of fullness in the ear. Because of the inflammation or the infection, fluid buildup is most likely to occur in the ear which leads to ear discharges. Even though it can be directly caused by specific pathogens such as S. pneumoniae, being previously infected with influenza or other types of AURI can increase its likelihood. This disease is more common in children than in adults since bottle feeding and inappropriate ear-cleaning procedures are one of its most common causes.

Even though the function of tonsils is to prevent bacterial infection, this organ at the back of the throat can still be infected or inflamed. Aside from the strains of bacteria that can cause other types of AURI, tonsillitis can also be caused by Streptococcus. Some of its main symptoms include pain at the back of the throat, difficulty in swallowing and hoarseness of voice. When left untreated, doctors may order a tonsillectomy wherein the tonsils are totally removed.

By taking Grand Prairie first aid classes, residents can take better care of their loved ones which can prevent these diseases from getting worse. Hence, patients will no longer have to opt for more extreme forms of treatment such as tonsillectomy. Knowing first aid also enables residents to avoid AURI since proper hygiene will also be taught in these classes.